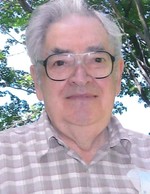 Adolph “Abe” Sica, 91, of Howlett Hill passed away on Thursday October 5, 2017 at the VA Medical Center in Syracuse.
He was born in Glens Falls, NY to the late Alphonso and Nora Sica. He attended schools and worked in Lake George, NY, where he met and married his wife of 64 years Marilyn. In 1968 they and their 6 sons moved to Syracuse, where Abe worked for the Carrier Corp retiring in 1991. He was a veteran of the US Army serving during WWII.
Besides his parents he was also predeceased by his son Michael in 2013, and brothers, Joe in 1996 and Bob in 2015.
He is survived by his wife Marilyn, sons Steve, Dan (Annie), Tim (Yvonne), Mark and Matt, sister-in-laws Dorothy and Sandy, seven grandchildren and several nieces and nephews.
Calling hours for Abe will be from 2-4 p.m. Sunday October 15, at the Plis Funeral Home, 33 North St. Marcellus. Funeral services will be private for the family.
Memorial donations in Abe’s name may be made to the Howlett Hill Fire Department.

Provide comfort for the family by planting a tree in memory of Adolph Sica, please visit our Heartfelt Sympathies Store.