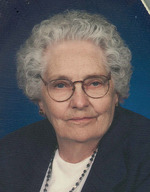 Jessie Helen Martin Oster of East Syracuse formerly of Jordan died peacefully at Sunnyside Care Center after a long illness. She graduated from Druid City Hospital School of Nursing at the University of Alabama Tuscaloosa. She worked as a nurse for the clinic of Brown Lipe Chapin and Auburn Memorial Hospital in the Maternity Ward for 27 years retiring in 1987. She was a Second Lieutenant in the US Army serving during the Korean Conflict.
Jessie volunteered for the American Red Cross blood drives, and the Elbridge Community Church Thrift Store and also delivered meals for the Jordan Elbridge Meals on Wheels. She was a member for over 50 years of the Elbridge Community Church, a member of the Jordan Elbridge Senior Citizens and Honorary member of the Amber Fire Department Ladies Auxiliary.
She was predeceased by her husband of 50 years Louis “Dutch” Oster in 2001, son-in-law John Hatter in 2010, parents Ethel and Lige Martin, sister Irene Tingle, brothers Letah, T.Z., Dowell, Leland, and E.J. Martin, sister-in-laws Beverly Oster Schmidt and Patricia Oster Vile.
She is survived by her daughters Rhoda (Bill Burrows) Hatter of Canastota, Melissa (John) Suflita of North Syracuse, And Teresa (Bob) Wilson of Michigan, son Martin “Bubby” (Doreen Farrar) Oster of Memphis. She also leaves behind 3 grandchildren Katie and Sam Wilson and Patrick Suflita of Hornell, one great granddaughter and brother-in-law George Schmidt.
Services for Jessie will be 1 p.m. Saturday June 2 at the Plis Funeral Home. Relatives and friends may call on the family from 11 a.m.-1 p.m. Saturday prior to the services at the funeral home, 33 North St., Marcellus. A family and friends get together will be held at the Jordan Elbridge Senior Center following the services.
Memorial donations in Jessie’s memory may be made to the Elbridge Community Church, Jordan Ambulance Fund or CNY ASA (Autism Society of America).

To send flowers to the family or plant a tree in memory of Jessie H. Oster (Martin), please visit our Heartfelt Sympathies Store.