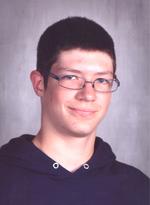 Matthew Norris, 16, died on Sunday July 29th 2018, as a result of a car crash. Matt was a student at Marcellus High school and would have been a junior in the fall. He was on both the wrestling and football teams. In wrestling he loved being competitive and honing his skill and talent as a wrestler. In football he loved to tackle and be right in the middle of a pile up. The coach had asked Matt once before a play if he felt “Mentally Huge” because he wasn’t physically huge. Matt’s answer was yes I do.
“Mentally Huge” was his attitude on life, he didn’t back down on the football field, on the mat, or when giving his opinion. He wasn’t afraid to try new things. Matt was the “leader” of his group of friends. He was especially close to his cousins, Rachael, Shawn, and Samantha DiGiambattista of Cato. One of his favorite hobbies was fishing.
He is survived by his mother and father: Joan and Steve “Reno” Norris, brothers: Joseph and Zachary, and grandparents: Janet and Wayne Norris of Marcellus and Christine and Dominick DiGiambattista of Otisco. He also had an aunt and four uncles: Sara and Peter Randolph of Skaneateles, Michael DiGiambattista of Onondaga, James DiGiambattista of Otisco, and Mark DiGiambattista of Seattle, WA, and five cousins Natalie and Brian Randolph of Skaneateles and Rachael, Shawn, and Samantha DiGiambattista of Cato.
A Mass of Christian Burial will be offered for Matt at 9 a.m. on Friday August 3, in St. Francis Xavier Church, Marcellus. Matt will be buried in Pine Ridge Cemetery, Navarino. Relatives and friends may call on the family from 1-3 p.m. and 6-8 p.m. Thursday August 2 at the Plis Funeral Home, 33 North St. Marcellus.
In lieu of flowers memorial donations may be made to Navarino Fire Department or Marcellus Ambulance.

To send flowers to the family or plant a tree in memory of Matthew D. Norris, please visit our Heartfelt Sympathies Store.