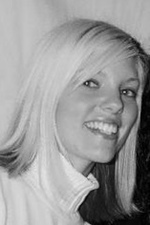 Nicole Christine Piper Adams, age 35, of Marcellus, died peacefully at home on Wednesday, December 27, 2017. Nicole was born in Syracuse on April 6, 1982 to Martin and Carol (Schumm) Piper of Marcellus. She was a 2000 graduate of Marcellus High School, and attended Camillus Dance Centre from kindergarten through her senior year where she studied Ballet, Jazz, Tap and Modern. Following high school she attended Onondaga Community College. After waitressing several years, Nicole pursued her true passion and became a stay-at-home mom. As a child, Nicole spent summers at the family camp on Otisco Lake and later enjoyed music, photography, reading, writing short stories, spending time with friends and being a mom. Nicole had a keen sense of humor and was a positive influence on the lives of many people, having bravely survived a brain tumor operation in 2007. She was a member of the Marcellus United Methodist Church.
Besides her parents, Nicole is survived by her daughters, Amelia and Piper, the father of her children, David Adams Jr. and his large, loving family, her sister Shannon (Ron Bush), Grandparents Harold and Agnes Schumm of Syracuse, one uncle, David Schumm, aunts Linda Pasiak, Marsha (Dick) Ames and Joan (Shawn) Wilson, many cousins, close friends and loving caregivers.
A celebration of her life will be held at a later date.
In lieu of flowers, memorials in Nicole’s name may be made to the Marcellus Fire Dept., Bishop Ludden Junior-Senior High School or the charity of your choice.
The Piper family would like to express our heartfelt thanks to the Marcellus Volunteer Fire Dept. and the many nurses and caregivers who became part of our family over the last ten years.

Provide comfort for the family by planting a tree in memory of Nicole C. Adams (Piper), please visit our Heartfelt Sympathies Store.