To share your memory on the wall of Shirley Ramsden, sign in using one of the following options:

Receive notifications about information and event scheduling for Shirley

We encourage you to share your most beloved memories of Shirley here, so that the family and other loved ones can always see it. You can upload cherished photographs, or share your favorite stories, and can even comment on those shared by others.

Posted Apr 26, 2019 at 09:29am
My deepest and heartfelt condolences to the family, I absolutely loved Mrs. Ramsden! She was one of the only people that saw through my constant lunch detentions and knew my good heart. I remember her telling me to turn around and stop talking so of course me being the lil brat I was picked up my chair turned it 360 deg sat back down in the exact same spot and wispered instead of talked....it took all her strength to not laugh and then she gave me another detention slip...i just smiled and said ok i will see you again tomorrow... Then played with her staple plie on her desk just to earn myself another day. I think I ate lunch with her more days durring middle school than I did in the cafeteria. Yet years later and everytime I would run into her at the store or where ever, she would call my name and give me a huge hug, always asked how I was and how big the kids were getting, she was able to see what a profound impact her kindness made on my life. Heaven has truly gained a special angel, fly high on wings like eagles, you will be missed dearly by the many lives you have touched including my own. Love you Mrs. Ramsden!!!
Comment Share
Share via:
LC

Posted Apr 16, 2019 at 12:51pm
Please accept the most heartfelt sympathies of Le Moyne College. We hope the love and memories you will forever hold in your heart bring peace and love during this difficult time.
Comment Share
Share via: 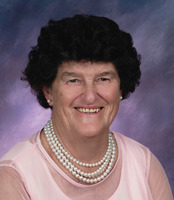 Shirley Ramsden
1
4
Add Photos
Upload up to 10 images at a time, max 8MB each