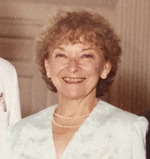 Shirley Smith Stoelzel, 91, of Auburn, died Wednesday evening at the Auburn Rehab and Nursing Center. Shirley was a native of Key West, Florida, the daughter of the late Charles and Reba Herrick Smith. She has resided in the Auburn area for more than 50 years. She was a member of the former Auburn Lionettes, and actively volunteered at her church and with several food pantries.
She is survived by her sons, David Stoelzel and his sweetie Brenda Martins of Auburn and Richard Stoelzel and his wife Val of Montreal, Canada, her grandchildren Jamie, David, Jennifer, Leslie, Amanda and Gabriel, and several great grandchildren, and her sister Ester Taylor of Florida. She was predeceased by her husband William G. Stoelzel on June 14th of this year.
Friends are invited to call Wednesday, October 9th, from 4 to 6:30 P.M. at the Plis Funeral Home, 220 State St., Auburn. Religious services will follow at 6:30 with Rev. Beth Malone officiating. Burial will be private.