To share your memory on the wall of William Updike, sign in using one of the following options:

Receive notifications about information and event scheduling for William

There are no events scheduled. You can still show your support by sending flowers directly to the family, or planting a memorial tree in memory of William K. Updike.
Plant a Tree

Donations are being accepted for: Hospice of CNY and the Finger Lakes.

We encourage you to share your most beloved memories of William here, so that the family and other loved ones can always see it. You can upload cherished photographs, or share your favorite stories, and can even comment on those shared by others.

Posted Apr 23, 2020 at 05:12pm
To the Updike family:
My husband, George, and I send our condolences to you on the death of your father. We lived on Orchard Street in Marcellus from 1968 to 1972. I am sure none of you remember us, but we remember you. At that time the street teemed with young families with lots of small children. We're attaching a photo of our daughter, Lauren's 2nd birthday party in January 1971. She is the front row, far right, with our son, Jim, next to her. Two of you, Nancy and Jeanne, I think are behind Jim. Paul Ballard and his sister Michelle are to the right and oleft of one of you. The three Powells are to the left with Jerry ___?___ at the far left.
One of you (Sharon ??? who was about 10- years old at the time) babysat for us about 1971 when we went to sign language classes. (Our daughter Lauren was born deaf.) We moved to Camden, NY in 1972 so Lauren could live at hoome and go to the NYS School for the Deaf in Rome, NY.
We had another connection about 2007 when my mother, Evelyn Masters, and your mother were roommates at Community General Hospital when my mother was dying.
Again, our sympathies to you -- now on the loss of both of your parents. Please know that you are in our thoughts. We fondly remember those early years on Orchard Street.
Marilyn and George Stoughton

The photo was faxed to the funeral home ,,, tried to add it on photo page. M & G Stoughton
TH

Posted Apr 19, 2020 at 07:07am
I was saddened to read of your Dads passing in the paper this morning. You are all in my thoughts during this sad time.

Posted Apr 17, 2020 at 07:54pm
We are very sorry for your loss, our thoughts and prayers are with you. We will miss seeing Bill, the porch conversations we had and his smiling wave when we drove by.
Comment Share
Share via:
AF

Posted Apr 17, 2020 at 12:31pm
Smiley will be missed by all. He was such a generous person always visiting us at the pharmacy on Thursdays, for girls day. He would sometimes bring us brownies or cake. When he would go to the casinos I would always give him money because he was always so lucky, and always winning on lottery tickets. We missed him when he couldn’t come in anymore. I was glad I got to see him a few weeks back . I am going to miss you Smiley. Love you forever, Annie. So sorry for the families loss.
Comment Share
Share via: 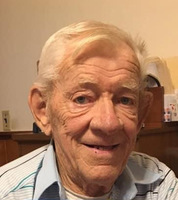 William Updike
1
4
Add Photos
Upload up to 10 images at a time, max 8MB each