To share your memory on the wall of Gertrude Tanner Bartlett, sign in using one of the following options:

There are no events scheduled. You can still show your support by sending flowers directly to the family, or planting a memorial tree in memory of Gertrude Tanner Bartlett.
Plant a Tree

Donations are being accepted for: Hospice of CNY and the Finger Lakes.

We encourage you to share your most beloved memories of Gertrude Tanner Bartlett here, so that the family and other loved ones can always see it. You can upload cherished photographs, or share your favorite stories, and can even comment on those shared by others.

Posted Mar 14, 2020 at 11:58am
When Gertrude married my Uncle Bill she became my Aunt Gert. Whenever I traveled from Nebraska to visit my mom, Helen Bartlett Sherman, we’d stop by to visit Uncle Bill and Aunt Gert. My mom who lived in Marcellus stopped by almost weekly to see them. When my mom passed away in 2010, I missed our phone calls and I realized Aunt Gert probably missed her visits. I called Aunt Gert just to say hi and see how she was doing. Aunt Gert thought of my mom as a sister and we had such a nice chat that I’d call every so often. Our phone calls back and forth became more frequent and we’d talk about everything from politics to the weather. She always told me not to send our Nebraska snow her way. She had a wonderful sense of humor. Several years ago when I visited, she said, “I think I’m losing it.” I dismissed that thought with, “You’re still sharp as a tack!” Her quick response: Which end?! I was like, “Good one, Aunt Gert!” When we ended our phone calls she frequently said, “Don’t do anything I wouldn’t do!” And I’d say, “Thanks!!” like that gave me a lot of leeway and she’d chuckle as she hung up. What it gave me was a warm feeling in my heart and a reminder of my own mom. I am so glad I got to know her better in the last few years. I will miss her. She was such an inspiration for how to live life by adjusting your attitude. She’d voice a negative thought and then move on to a more positive view. I am so very happy to have known her. My heart goes out to her family and friends. May we continue to be inspired by her. -Wanda Benigno
Comment Share
Share via:
MC

Posted Mar 08, 2020 at 12:03am
Dear Tom and family, I have fond memories of your mom and dad and Jodele through our growing-up years on Hickok Ave. Your mom was an important part of the Huntington School Mother's Club. She and my mom, Helen Angarano, would often meet "across the street" for chats. Her obituary shows she had a very long and full life, with the sadness of losing a child and the joy of having a wonderful extended family through the years. May she rest in eternal peace and may your fondest memories of her keep her always in your hearts.
Maureen Angarano Conte
Fairfax, VA
Comment Share
Share via:
KD

Posted Mar 05, 2020 at 10:26pm
The picture with the small child is of my grandmother, Mrs. Bartlett, with my daughter, who is only 19 months old. We had the pleasure of visiting my grandmother often during her last year of life, and Ruth's infectious smiles brought much joy to my grandmother - especially when she needed to be cheered up the most. Ever the teacher, Grandma taught her how to count to three! That moment, like so many others, were spontaneous, and made the drives up from Corning always such a pleasure.

Posted Mar 05, 2020 at 08:33pm
1. Back then, the cutter was pulled by a horse named Barny.
2. Mystery of the disappearing pickled beets - it was a scheme done by the children.
3. Edna left the farm with her girls Lula & Gertrude. Lived in different area places where Edna taught school.
4. See picture of where Gertrude's mother was born in 1896. Gertrude's grandmother was born in Otisco in 1854. Posted Mar 03, 2020 at 08:30pm
I'll remember Grandma was always a great listener and gave good advice to help others. She believed that a good sense of humor was key to being happy. Fun memories include Grandma riding her 3 wheel adult tricycle, orange trees & alligators in her yard in FL, going to beaches in NY and to Disney World. As a child she played cards with my brother and I, complete with drinks and snacks. Additional enjoyable card games when I was a young adult visiting in Florida. To bring it full circle, my children played cards with Great Grandma at her home in DeWitt to keep her happy.
Comment Share
Share via: 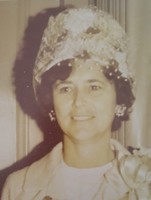 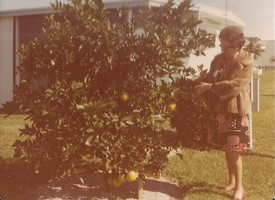 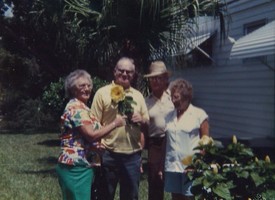 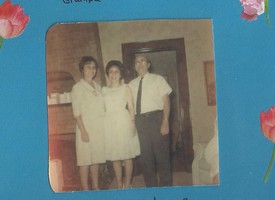